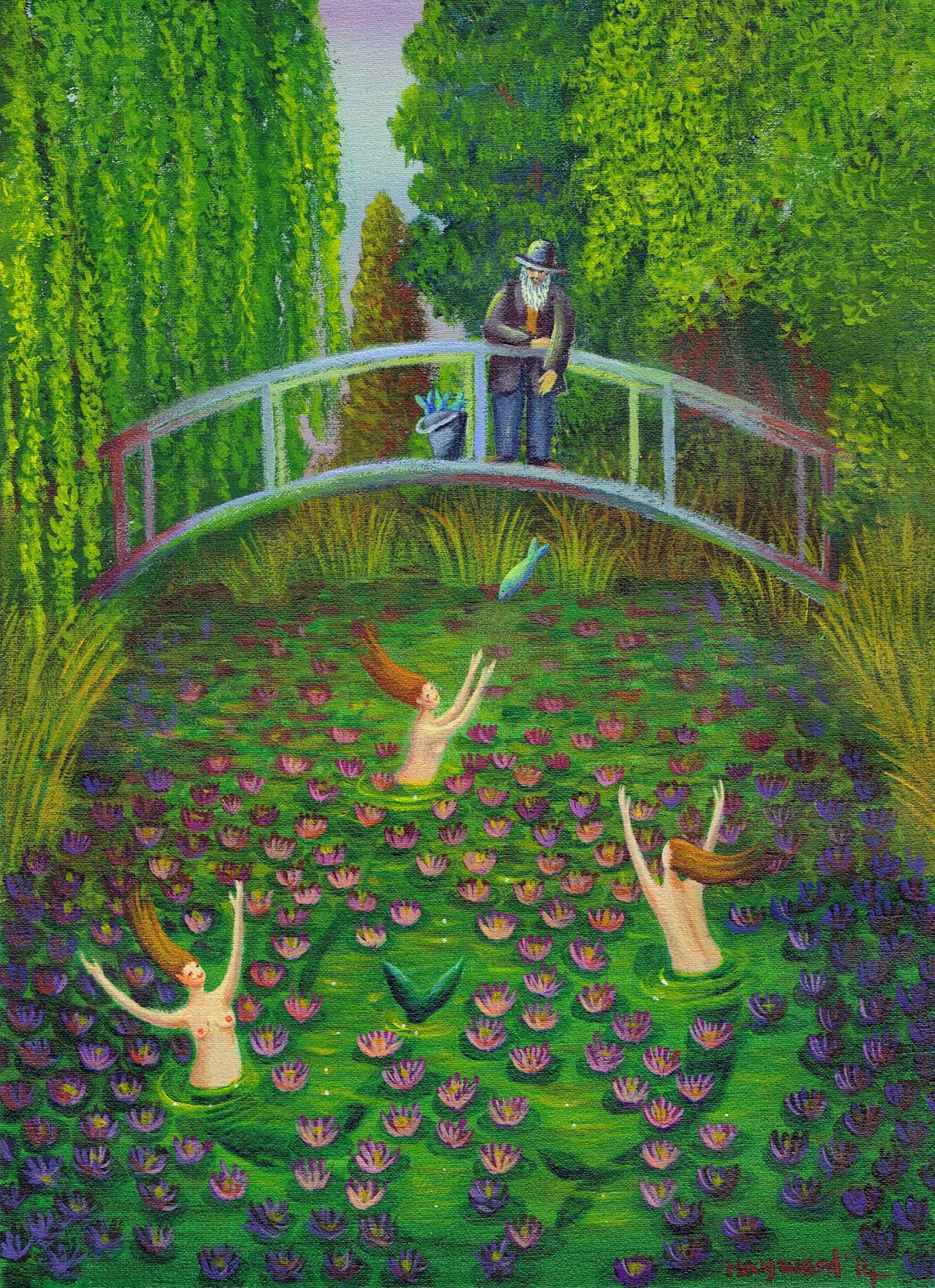 This artwork which is fresh off the easel is titled...What Monet really saw in his Lily pond....I am so delighted and relieved that I have finally gotten around to painting this image which has in all honesty been muddling around in my mind for years. Firstly I love the impressionist art movement even though it has been ridiculously overexposed and randomly and not at all connected I love Mermaids, Sirens and water nymphs. So here, very much tongue in cheek (Monet who is famous for his artistic captivation of his Lily ponds and his paintings of them onto huge canvas's) actually had another secret fascination and that was at twilight he would venture onto his bridge and call out to his beautiful nubile mermaids who would frolic and flirt with Monet. Monet did realize, though, that his captives were lovely to watch and feed, but extremely dangerous, like all sirens if he should accidentally fall in the sirens wouldn't hesitate in gobbling him up!
Over many years I have been building up in my imagination what Mermaids are like. Much of this realization has been through reading about these sea and water creatures since my childhood days and then again through story telling to my two boys when they were much younger. One of our favourite family expeditions was to go searching for treasure on our local beach. Amongst the shells and stripey pebbles we found shards of sea worn china.It was such a thrill to find these pretty pieces, usually they were blue willow patterns and I often wondered where or why it rolled up on the beach, some pieces seemed to be very old! So it was when one of my boys asked me where it had all come from...I just automatically replied that it was because deep in the sea after Neptune and his mermaids had eaten their dinner the naughty mermaids couldn't be bothered to do the dishes and just tossed them over their shoulders and of course they would break and eventually many moons later arrive onto the beach! For next few years my boys were convinced this was true..until obviously, like the belief in Father Christmas waned they weren't so convinced by my reliability of telling the absolute truth and just humoured me as I was the child that refused to grow up!

Mermaids are very naughty, dangerous even, as they wouldn't hesitate to eat humans. They are extremely vain, however they have a soft spot for Polar bears...mainly because the Polar bears are completely besotted with the mermaids and they are often seen together, frolicking or generally lazing around. Polar bears are quite happy to be servants to the mermaids. 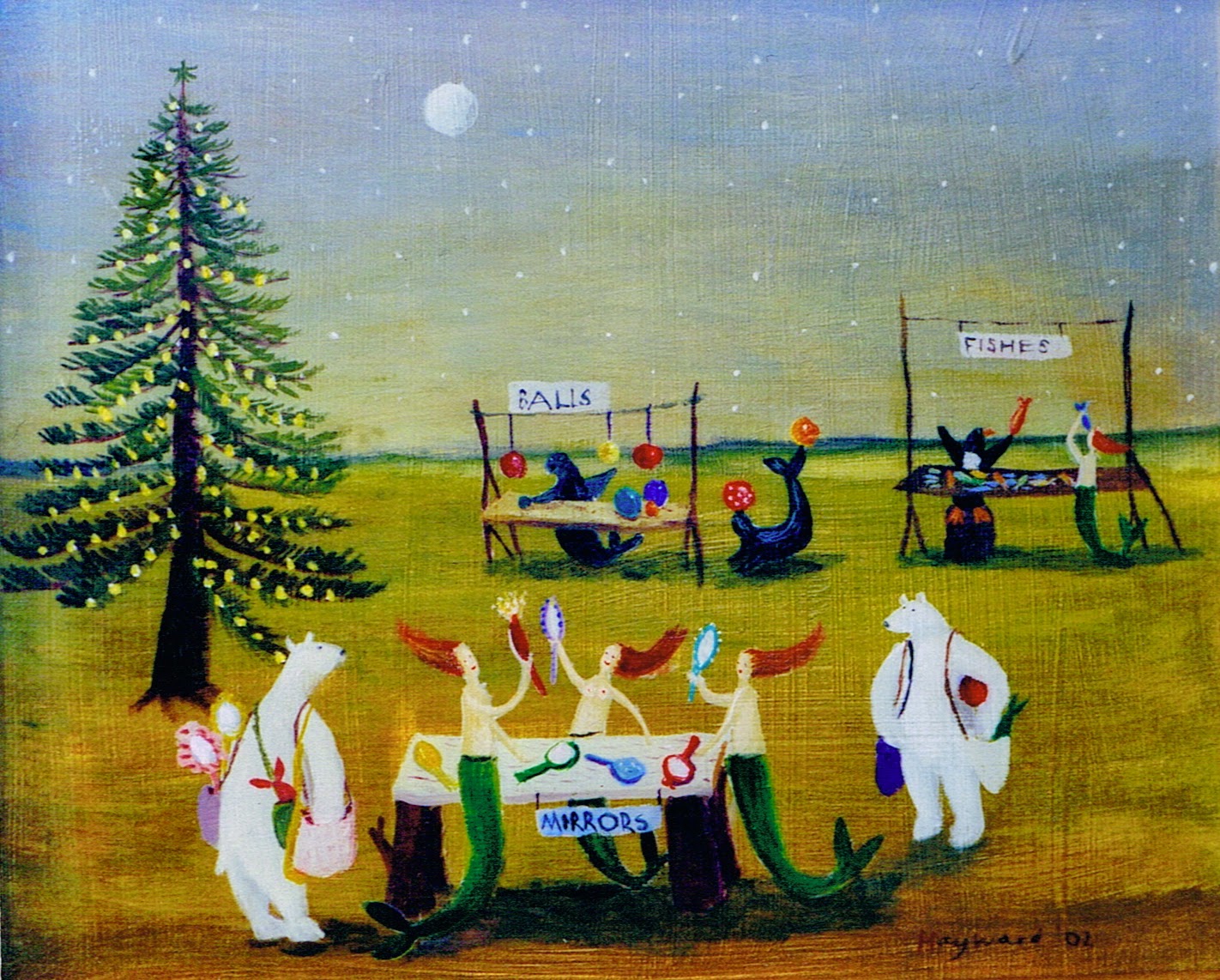 As you can see here at this seaside beach fete the Mermaids are having a jolly good time with their faithful companions the Polar bears lumbering after them. Having been to the Penguins fish stall and the Seals 'balls' stall the mermaids are now stuck at the mirror stall....such is their vanity they can never have enough mirrors!
I painted this artwork in 2002 and since then I have painted several other 'Mermaid' artworks, but sadly I never really got a good clean scan or photograph of them....so some artworks may have to be reinterpreted and brought back into life in Annie's Art collection...Plus there are many other Mermaid tales to be told!

Back to reality my little shoppe is just about to get it's Christmas make over...With Spring definitely well sprung and the promise of summer wafting on the breeze it is odd that here in the southern hemisphere Christmas in all it's kitschy glory will be glinting in summer sun and not under the street lamps and winter chill like of the northern hemisphere. What do you feel is better..Christmas in the summer or the winter?...I wonder what the Mermaids would pick....?
Posted by Unknown at 19:39