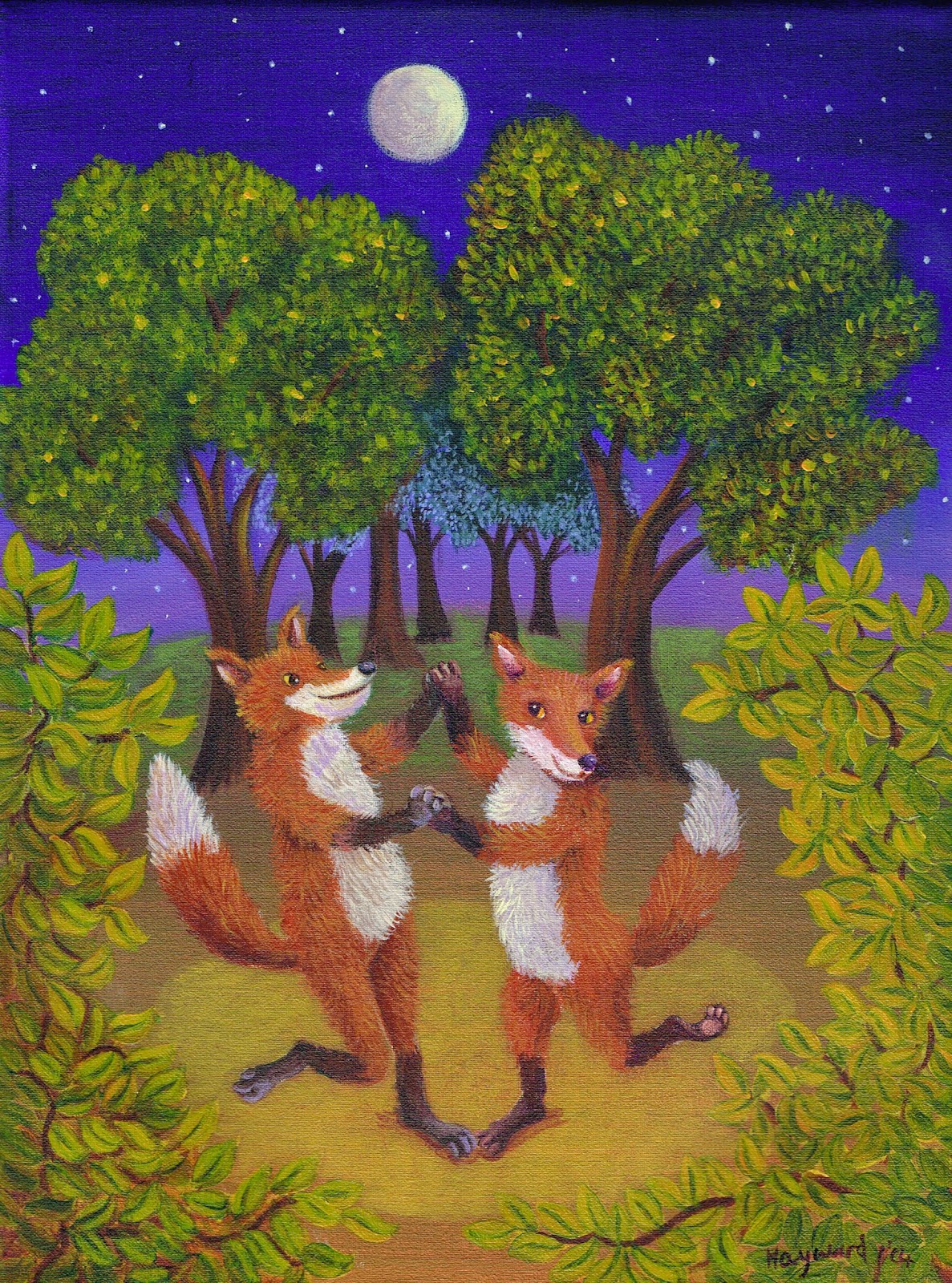 I am listening to my favourite music app at the moment and that is Pandora. In New Zealand it is either Spotify or Pandora as the new way to find music via the internet. You can listen to it all day long and not have to think what shall I listen to next! Its an absolute bonus having it play in my open Studio/gallery/gift shoppe....I am constantly entertained by a stream of music that also showcases artists that I never knew existed and now I am crazy about, so it's a learning tool too, however more importantly I love to spontaneously get up and have a bit of a boogie on down in the shoppe or when I am painting!!!! I can't help but move the body in time to sway and rhythm...as I have mentioned in earlier postings I love music and dancing so it will crop up in my artworks...Hence my latest artwork..'Fancy a quick Foxtrot?'
So here are my darling Fox's in the dead of night under a full moon, totally and amorously absorbed in each other doing the romantic and feisty Fox trot. As much as I love dancing I categorically rate myself as a free form floater. I admire the people who can Ballroom dance with the ease of a seasoned professional and I am definitely jealous of those who can Ceroc, Mambo, Tango or Tap dance. If I attempt any structured moves I suddenly get two left feet and breakout in a sweat and quite frankly lose the 'passion' of moving...So I remain a observer of dance, because who knows when I might get the desire to paint the 'The Tigers Tango'....Watch this space.....

I love all Gods creatures apart from two...in the insect world..I find Flies repulsive and Wasps darn right unnecessary in the realm of nature..and they scare the bejesus out of me, having been stung numerous times in the summer months. I am almost sure they just want to sting, just because they can! So here we are in well into Spring and I am concentrating on the artwork above and then suddenly Ruby my precious hairy muse who usually dozes in her doggy basket in a serene manner, suddenly let rip with a bark that set my paintbrush fly from my hand, such was the surprise she gave me. Turning around to see what had made her react I saw the biggest wasp in creation hovering centimeters above her nose!!!!!....From there it flew in a droning sort of manner towards me!!!!OMG on high alert I managed to deflect it by flapping my arms and escaped into my tiny kitchenette area and grabbed the fly spray...and blindly sprayed in the wasps direction..eventually the wasp must have realized I had a weapon more lethal than its sting and flew towards the window ledge and started to do that dying thing so for good measure I gave another good squirt of spray and the Queen was no more, lying inert. I scooped it into the dregs of my takeaway paper coffee cup...so effectively drowning it too and popped it into the waste paper bin outside. End of story, but NO....I was listening to the radio and there was a story/interview with a bloke called Bob from in the South Island doing a study on Queen wasps...he was from the Abel Tasman park organization..and he was asking for any listeners who catch a Queen wasp to send it down to him...at this stage I was feeling a tad guilty for my over reactive behaviour and to make amends with karma I went out to the bin and retrieved my coffee cup and soaked wasp. I laid her out on a napkin to dry out and went back to painting. Well...my goodness...about a couple of hours later....just like one of those B grade horror movies Queenie Wasp seemed to gasp and then twitch and kept twitching and oh quelle horreur started to faintly 'drone'. Resisting the urge to reach for the fly spray I wildly thought about what I could contain it in just incase it really did come alive again and come FOR ME?!? So I picked up my trusty little pencil sharpener container and scooped it into that and firmly screwed the lid back on. Thank goodness it was the end of the day in the shoppe so happily left my captive to squirm and drone to its hearts content....I am thinking you are reading this and think I am pretty heartless...and me thinks I am just plain gutless! The following morning I opened up the shoppe feeling slightly intrepid and with a twinge of guilt I checked out my pencil sharpener and Queenie lay there inert...finally she had died...next was to package her up for send her to Bob...I do have mixed feelings about the whole ordeal. I think on my shoppe door I should have a sign...Every creature welcome except big black flies and wasps and definitely no Queen wasps!

I did not mean to write so much....you are more than welcome to speed read the rest or just look at the last picture! Christmas or Christmad! as I like to term it. This is the third year of being a shoppe/gallery/gift shoppe, but this is the first year of big organised Christmad gift buying which has to be done here in New Zealand mid July!!!!...Well having an upside down seasons..our July is cold so with a pinch of imagination buying Santa,Snow and Deer themed gifts isn't to hard. Being my first time I had a sales rep make a visit and she quickly bamboozled me with umpteen catalogue's of temptation!..I don't what possessed me but I think I had a moment of insanity and started ordering like I was head buyer of a major department store!...Not that I remember, but when mid October 8 big boxes arrived via courier, not santa...I nearly died...and I twice nearly died when I saw my invoices...Crazy artist over buys Christmad stock for tiny shoppe in quiet out of the way by the seaside village. Well I had to bite the bullet and put it all out in my now overcrowded Christmad themed shoppe...Luckily no-one has scowled in Scrooge like tones about...or if they are hopefully being the mad artist they think I am ..the just sigh and say...'ah well, that's Annie for you'....and to celebrate my entrance into an early Christmad celebration LETS ALL DO THE POLAR POLKA!!!!!!and hope like crazy I sell enough to pay the flipping Christmad bill!...BYE for now! 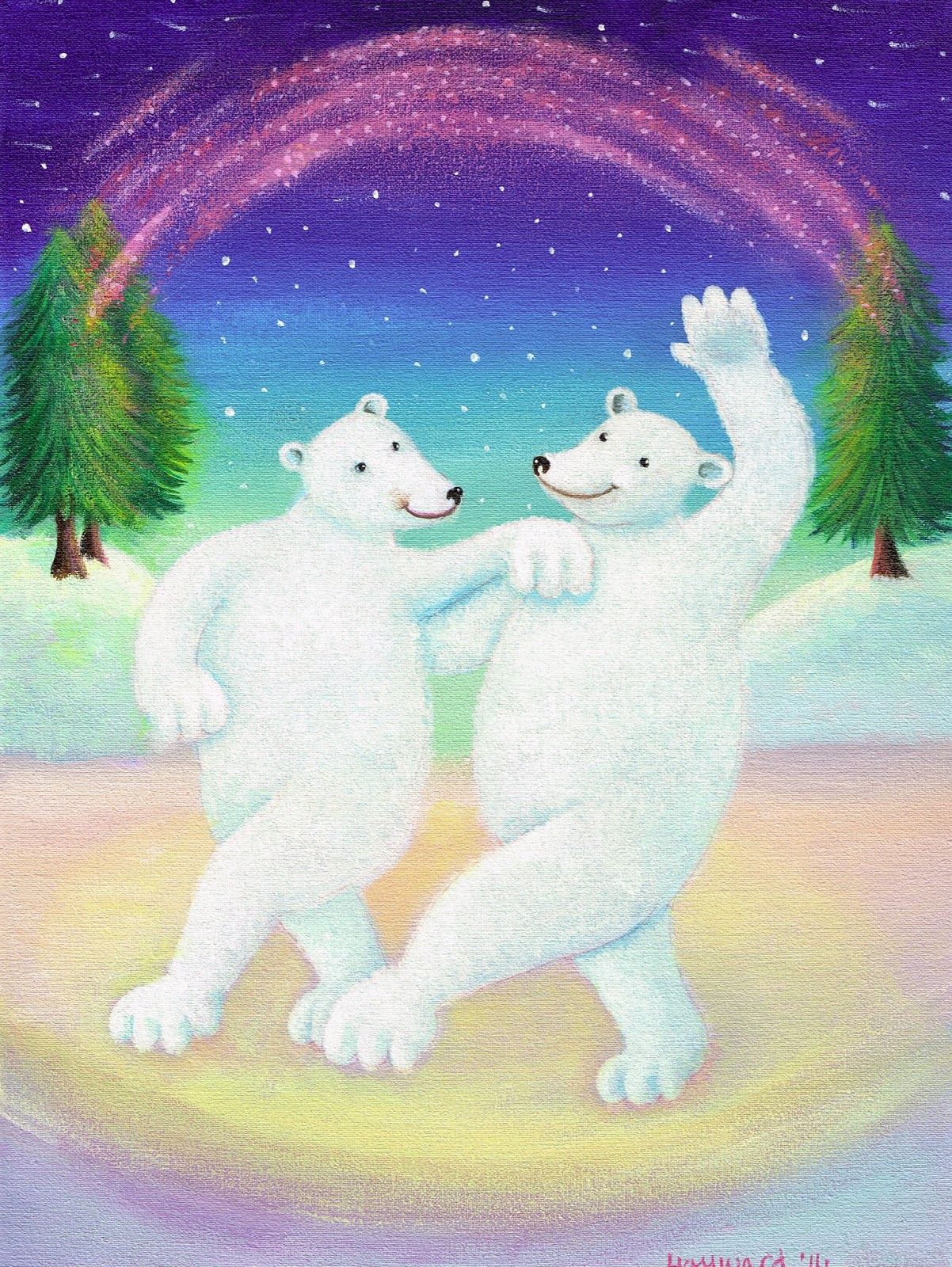